I like to think I have good taste in music. When I was a kid, I played a lot of video games. Video games are super fun. The best part about video games, arguably, is the music. I will always hold the opinion that the Super Nintendo era gave us some of the best video game tunes in the history of ever. EVER.

So, these days I listen to a lot of video game music (VGM) cover bands. One of my current favorites is a recently-formed act, The Returners. They're based in Austin, TX and they totally rock.

But they don't totally rock just because of their music. They totally rock because the band's founder, Lauren Liebowitz, recently helped me out with putting together a math task that involved coffee spills and band shirts.


Background
Over the past couple of years, the math team at my school worked together to put a four-year curriculum in place that's closely aligned to the ACT college readiness standards in mathematics. The skill that my students are currently working on is XEI 602:

We wrote a ton of problems related to each skill. For this particular skill, we wrote problems such as the following:

To supplement this skill, I thought of a different way to present this type of problem. Instead of spelling out the necessary mathematical information in a word problem, I wanted to present a more realistic situation and have the students work a little bit more to dig up the mathematics of what was happening.

So I thought of the following scenario: Suppose you were selling a few different items and keeping track of your sales on a sheet, such as this: 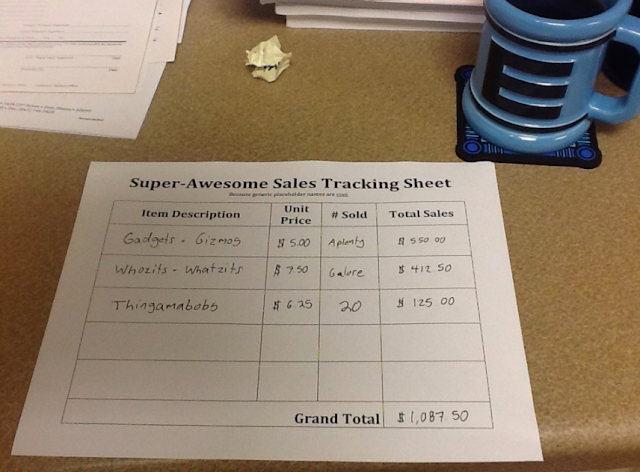 And then, suppose you accidentally spilled coffee all over it: 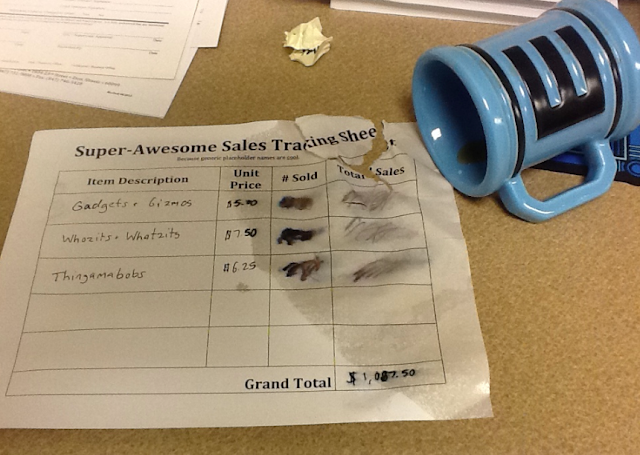 Some of the information is lost! How could we figure out the information that was ruined by the coffee spill? (Obviously, there isn't enough mathematical information in the above example, which is purely for show. But given the right info, this becomes a challenging math task. Also, as it turns out, it's pretty challenging to simulate a coffee spill. And ink is pretty resilient these days.)


The Task
I spent some time thinking about what product(s) to include on the sales sheet that I was going to spill coffee on. One night, I was folding laundry and I came across my official "The Returners" t-shirt. My brain was like, "BAM. T-shirts!"

I messaged Lauren to pretty much say, "Hey, I'm using your band in a math problem!" And she basically replied, "Cool! Can I do anything to help?" And actually involving her hadn't really occurred to me, but she was totally willing to assist and I couldn't turn that chance down.

I put together a "sales sheet" listing three different types of Returners shirts, with information about prices and inventory. Then I spilled coffee on it:


Lauren included the following e-mail, and also sent along a picture of a few of her band's shirts (rolled up neatly into little shirt burritos): 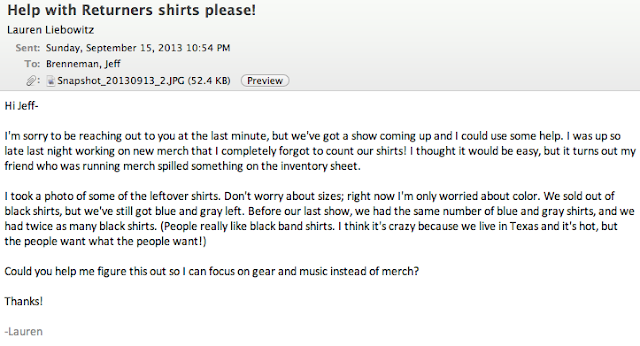 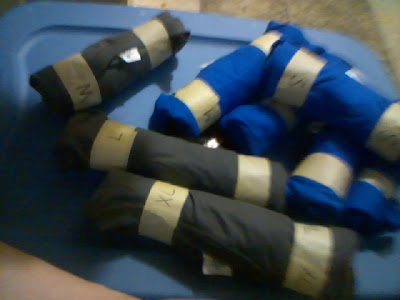 Armed with the above information, my students were set to the task of helping Lauren figure out how many shirts were sold at her most recent show.


How The Task Went
I put the students in groups of three for this task. They were each given a copy of the e-mail, the ruined sales sheet, and the photo of the remaining shirts. I also gave them a worksheet with a few questions that each group member needed to contribute to.

My first period jumped into this task right away. There were a lot of good conversations going on at the start: they were looking through the documents, figuring out what information was important, and talking about how they were going to represent each type of shirt as variables in equations.

There was debate over how to represent "blue" versus "black," since both started with the same letter. Some students decided to use b for one and bl for another, but soon found that there was still no distinction (since both colors start with the letters bl). One student finally suggested using k for black, which certainly helped things.

Students were able to figure out important bits and pieces of information needed to set up an equation to represent the total sales: from the sales sheet, they found the total money made and the cost of each shirt. From the picture, they were able to determine that there were 5 blue shirts and 3 gray shirts that went unsold from the original inventory.

Where we ran into trouble was figuring out how to actually set up equations representing the total sales. Groups during my first period class initially set up their equation as:

where k represents black shirts, b represents blue shirts, and g represents gray shirts. The above equation was close, but incorrect; students from my first period continued working through the problem using this equation and ended up getting answers that didn't make sense in the context of the problem (e.g. they got non-integer values when they solved for k, b, and g).

They were on the right track, but they didn't account for the fact that a few shirts went unsold; this was kind of the "tricky" part of the task and led to a lot of frustration among my first period students. I let them have some time to try and sort things out on their own and dropped a few hints to try and point them in the right direction. Eventually, I saw it was going to be best to stop and have a quick whole-class discussion about the unsold shirts.


After my first period class, I adjusted my lesson plan so that we talked about the correct expressions for shirts sold toward the beginning of the activity. This adjustment made things go more smoothly in my other three classes. Although, in my second period class, students were having trouble with question #2, which required them to re-write their equation from question #1 in terms of one variable. We stopped to have another conversation about what to do.

I asked students to re-read their e-mails and to look specifically for relationships between the different types of shirts and how many of each kind there were. The students noticed the following info:
From here, we talked about how to use this information to write a few small equations that would help us with question #2. The students came up with the following equations:


Once we were armed with these equations, we were able to go back to our total sales equation from question #1 and use substitution to re-write it in terms of one variable:


I made another adjustment to my lesson plan for my third and fourth period classes to include a discussion about representing these relationships toward the beginning of the task as well. With this guidance, students were able to successfully determine how many shirts had been sold:


What I Would Change Next Time
This task was given to the students while we were in the middle of our mini-unit on writing equations and expressions based on information from word problems. After doing this task and reflecting on how things went, I think this task has a lot of merit as one of two things:
My students were resilient and we were able to have a lot of good mathematical conversations during this task. I could also tell there was frustration stemming from confusion about what to do at each problem. I think this might have been the result of not yet having enough practice with the skill, and I also think I didn't provide an appropriate amount of scaffolding, originally. In my later classes, I made adjustments and discussed some important aspects of the problem at the beginning of the task; this seemed to help students successfully solve the problem.

I might also change the prices and the types of merchandise on the sales sheet in the future; a few students looked at the prices and thought, "why didn't they just sell shirts for $5? It'd be easier to make change." In reality, the shirt prices are actually more like that. I made each shirt a different price; otherwise, the task would have been pretty easy to solve. Next time, I'd probably include other merchandise such as CDs, buttons, etc. and let the prices reflect something that would actually be charged at a show.

Overall, I was pleased with this task. I certainly learned a lot, and I hope to come up with even better tasks in the future and I continue trying to figure out how to do PrBL!

Latest from the blogosphere: